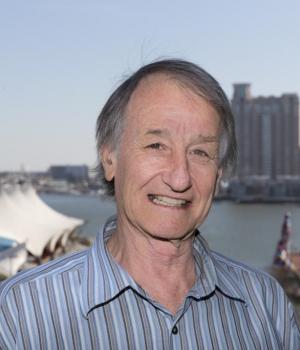 Robb's main research interest is in hyperthermophiles that can survive and even thrive at temperatures up to 100°C (212°F), which in mere seconds can destroy DNA, "normal" proteins, and, hence, life. Dr. Frank Robb's main interest is learning specifically how these organisms can maintain stable proteins in the face of a thermal onslaught. His key focus is on heat shock proteins, known as chaperones, that the organisms produce to allow them to fold the proteins necessary for life. Robb and his colleagues are working toward various applications including using chaperones to improve high-temperature industrial or biomedical processes. The team, supported by the Bill and Melinda Gates Foundation, is exploring methods that seek to enhance the durability and immunogenicity of live vaccines through expression of heat shock proteins from thermophiles. If successful, the project will enable enhanced long term storage of vaccines in locations lacking refrigeration, for example in developing nations.

Another area of research is in tapping the thermophiles' penchant for producing hydrogen as a byproduct in order to develop new hydrogen production methods to add to the arsenal of technology needed for future supplies of renewable energy. Recent work has also focused on extremely stable cellulases for exploiting woody feedstocks for biofuel production.

The search for thermophiles has taken Robb to some exotic locales, including deep-sea hydrothermal vents, geothermal springs in the volcanic regions of New Zealand, Iceland, Eastern Russia's Kamchatka, as well as Yellowstone and Lassen National Parks.