Dr. Jeanette Davis’ most memorable experience of being a student at IMET was putting together the annual Colloquium for students in the Marine Estuarine Environmental Science (MEES) program. She and other students made several changes to the format of this annual event – replacing some of the long lectures with panels of MEES alumni who could talk about their experiences as scientists after graduation. Jeanette and her classmates led this transition in 2012 and it stuck. In 2019, now a Ph.D. and Ocean Policy Advisor at NOAA, Jeanette took the stage to serve on a career panel herself. This demonstrates characteristics common in Jeanette’s education and career: an ability to lead and a desire to give back.

As a student, Jeanette was a leader and a diligent scientist. She was the president of the Graduate Student Association, leading student meetings and initiatives. For her dissertation, she studied marine sea slugs and their associated bacteria in the lab of Dr. Russell Hill. Reflecting on the various challenges she faced during her doctoral research, Jeanette said, “A part getting your Ph.D. – or becoming a good scientist – is really learning how to accept failure and do things over and over and over again until you get it.” This kind of determination is also important for working in policy, which is what Jeanette decided to do after graduation. 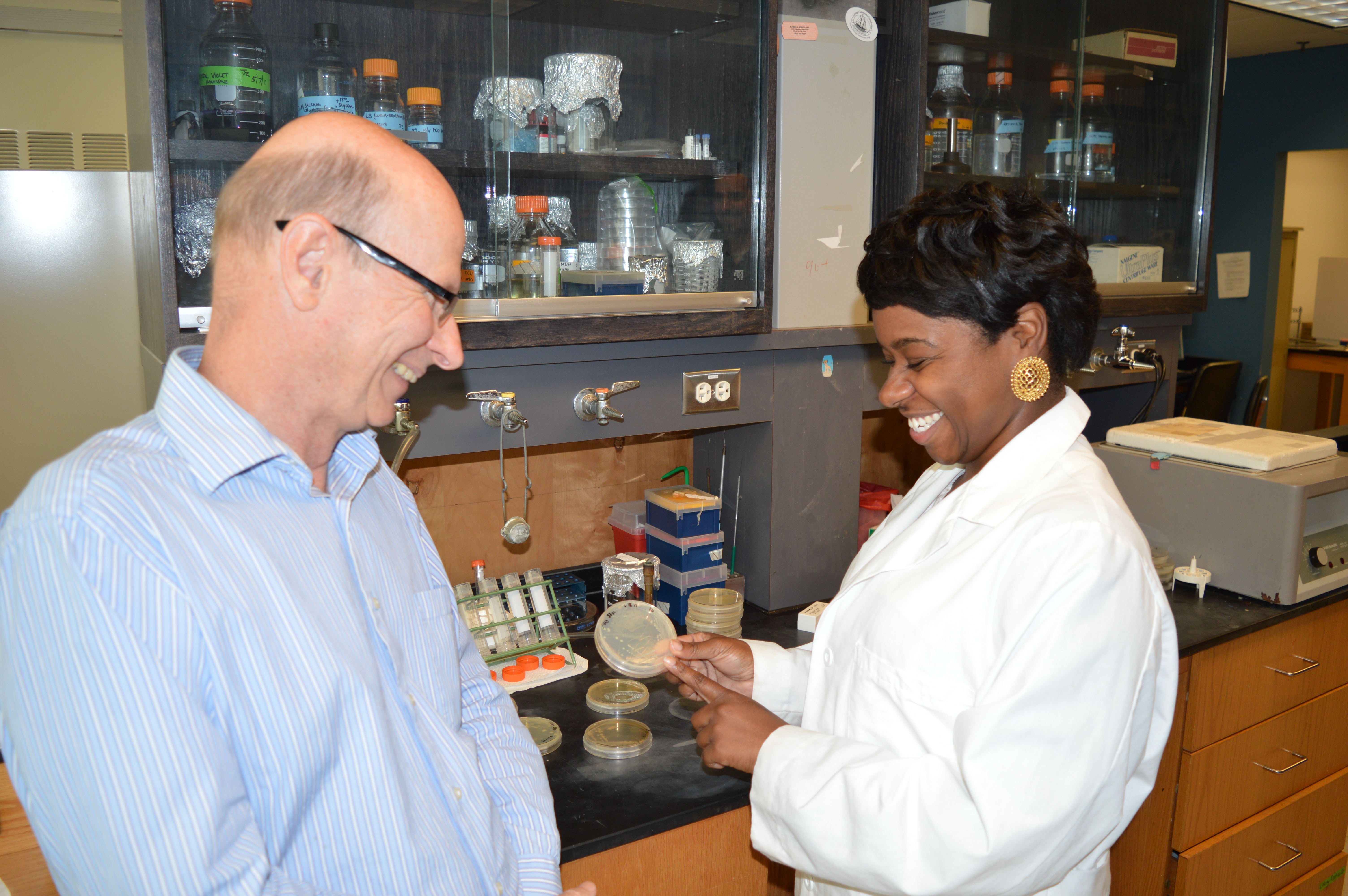 Jeanette in the lab with her advisor, Russell Hill. Jeanette conducted her Ph.D. research on sea slugs.

Jeanette began her career in policy as a Knauss Marine Policy Fellow, which pairs fellows with agencies and legislative offices in the federal government. In this fellowship year, she worked at Science and Technology, where she collaborated with many Ph.D. scientists who combined their knowledge of science with the policy work they do. Now, as an Ocean Policy Advisor at NOAA, Jeanette has been able to strike this balance, doing science at the lab bench as well as writing reports to help NOAA address its Congressional mandates.

Recently, working at the intersection of science and policy has meant leading omics initiatives. Jeanette is part of a team developing NOAA’s capabilities to use molecular techniques to address mission mandates. She spent 18 days at sea using environmental DNA, or eDNA, to analyze abundance of Pacific Hake. This work draws directly on molecular science skills that Jeanette developed at IMET and will improve fisheries data to better inform policy work at NOAA. She is using her training as a scientist to lead this transition, which will have long-term impacts on the health of fish stocks.

Through science, Jeanette has found a fulfilling career and a way to have a positive impact on the world, and she is committed to sharing that love with others, especially those who may feel that science isn’t for them. Earlier this year, Jeanette published a children’s book called Science is Everywhere: Science is for Everyone. In this book, she shows that science doesn’t just happen in a lab. Geology, biology, and chemistry are all around us and curiosity about those topics is science. Curiosity as a kid is part of what led Jeanette to study science and so she wanted to show the importance of cultivating those interests.

Science is Everywhere: Science is for Everyone shows that anybody can be a scientist, with illustrations of kids of all races donning lab coats or astronaut suits. While many kids, like Jeanette, are curious about the world and as children, minoritized groups and women are often discouraged from pursuing higher degrees in scientific fields. In Jeanette’s book, every child can find a role model to encourage their imagination of a future in science. It’s important for kids to know that science is for them because, as Jeanette found in her Ph.D. work, there are often many challenges and failures in research, but knowing that you belong can help you push through and grow.

Writing this book is part of a broader commitment to promoting diversity in science. Jeanette first came to IMET as an intern in NOAA’s Living Marine Resources Cooperative Science Center (LMRCSC) program, which supports graduate students from underrepresented groups in the sciences. She was also supported by LMRCSC through her graduate studies, receiving funding and attending workshops. This program was one of the first places where Jeanette considered a career in policy, since NOAA was the sponsoring organization. Now, Jeanette does outreach to schools, leading experiments in classrooms, and speaking with kids about her path as an African American woman scientist. In this way, she creates safe spaces for people of color to explore their interest in science. And the children’s book she wrote is only the first in a series that she plans to release in order to encourage all kids to get into science. Jeanette said, “This book series is about being the scientist that I needed to see growing up and ensuring that other young people see that too.”

Many of the students who heard Jeanette speak at the MEES Colloquium were inspired by her career path and her ability to work at the intersection of science and policy, as well as by her outreach work to increase diversity in science. For those students, she has some helpful advice. “It’s okay if you don’t know where you’re headed yet,” she said, “but you pursue the things that make you happy and that you feel you can contribute to. I have a vision for what I want to do with my career, but there’s not a linear way of getting there.” Just as in graduate school, where failed experiments are a part of developing as a scientist, in one’s career, there may be detours or roundabout ways of getting to a goal, all of which can be learning experiences and part of pursuing a broad vision of personal success.