Think about when you were 5 years old- what would you have said if someone asked you what your dream job was? Many of us would have said rock star, astronaut, professional athlete, or even President of the United States but, how many of us actually became those things. Nick Coleman is one of the rare few. At 5 years old, Nick was proud to announce that he would one day become a marine biologist and guess where he is now.

Nick is a master’s student in the Marine Estuarine Environmental Sciences (MEES) program at the University of Maryland Center for Environmental Science (UMCES), Chesapeake Biological Laboratory (CBL). To add more acronyms to this growing list, Nick is a part of the National Oceanic and Atmospheric Administration (NOAA) Living Marine Resources Cooperative Science Center (LMRCSC) partnership with UMCES overseen by IMET’s Dr. Eric Schott. The LMRCSC trains graduate students from underrepresented communities in marine science for careers in research, management, and public policy that support the sustainable harvest and conservation of our nation’s living marine resources.

Let’s sit down with Nick to learn a little bit more about him and LMRCSC.

Why did you choose to study at UMCES and participate in the LMRCSC program?

I participated in an internship at the Smithsonian Environmental Research Center in 2018 and during this internship I was introduced to acoustic telemetry. For one of my projects, I received data from multiple scientists in the Chesapeake Bay area, one of these scientists being Dr. Dave Secor, who is now my advisor at the Chesapeake Biological Laboratory. After the completion of my internship, I reached out to Dr. Secor and let him know that I was interested in acoustic telemetry and from there we developed a rapport. He introduced me to UMCES and ended up offering me a position in his lab.

During this time, I shared with Dr. Secor that my goal was to work in the federal government rather than academia. Upon learning this, he introduced me to another student in his lab Ben Frey, who was a part of the LMRCSC program. Ben shared his experience with me and let me know about the opportunities provided by the LMRCSC. As a NOAA program, it is a great way to learn more about working for a government agency. After speaking with Dr. Secor and Ben, I was excited to apply.

What inspired you to study science/marine science?

My dad used to keep aquariums when I was a kid and my mom liked to joke that I watched the fish in the aquarium more than a typical kid watched TV. My fascination with fish really snowballed from there. There is an iconic photograph in my family of me chasing the fish around the aquarium with a net… I guess I started doing research at an early age! My parents saw my interest and fostered it, signing me up for any opportunity to learn and interact with the ocean. By the time I was seven I was telling people I wanted to be an “ichthyologist”, or a person who studies fish. In high school I spent several summers volunteering at the Smithsonian Environmental Research Center and my senior year I actually donated a spiny lobster to my marine science department as a senior going away present. His name was Larry and I had him overnight shipped from California. My interest in marine science brought me to Coastal Carolina University where I was able to major in marine science.

What is your current research focus?

I am getting my masters in Ecological Systems at UMCES’s Chesapeake Biological Laboratory. My thesis uses acoustic telemetry and multibeam sonar to estimate the abundance of Atlantic sturgeon in the Nanticoke River (a tributary of the Chesapeake Bay). To give you a little bit of background, Atlantic sturgeon were previously extirpated from the Chesapeake Bay, meaning their population no longer existed in the area. However, within the last 20 years, they have been rediscovered in tributaries of the Chesapeake Bay. One of these tributaries being the Nanticoke River, which is on the eastern shore of Maryland.

As anadromous fish, sturgeon are born in freshwater, migrate to the ocean, and return to freshwater to spawn. It was on the last leg of this journey that researchers once again, discovered sturgeon entering the tributaries. Thrilled at the discovery that Atlantic sturgeon were no longer locally extinct, scientists began studying their recovery.

Similar to what you might see on Shark Week, my research uses acoustic telemetry tags. We tag the fish and then monitor their movements using receivers that essentially “listen” for the tagged fish as they move through the water. We can then use this information to study and understand their behavior. In an ideal world we would be able to use this to identify when and where they are spawning however, they have been more elusive than we would like. Because of this we have also implanted multibeam sonar, which comes in a variety of forms. I am using two different versions of multi-beam sonar for my research, side-scan sonar and acoustic imagery. Side scan sonar is more traditional whereas acoustic imagery could be thought of as a fish ultrasound, it provides better image quality at certain distances. The goal of this is to use the methods I mentioned, acoustic telemetry tags, side-scan sonar, and acoustic imagery, in combination to estimate the abundance of sturgeon annually.

Why did you choose to pursue this research topic?

This topic really checked a lot of my boxes in terms of research interests. I have always been fascinated by animal behavior, especially in large animals. In my undergraduate studies, I worked on a project with sand tiger sharks and hoped to continue working with large migratory animals while at UMCES. I also wanted to continue working with acoustic telemetry as a result of my experience at the Smithsonian Environmental Research Center. I am grateful that my research here at UMCES allows me to look at fine scale movement of large animals in a collaborative environment. This research allows us to paint big pictures, which I think is really fascinating.

Can you explain NERTO and your experience?

NERTO is the NOAA Experimental Research Training Opportunity which is just a long way to say internship. It is a 3-month long program for LMRCSC students. The students can complete this internship at any NOAA laboratory of their choosing, with the goal of aligning their research to a current NOAA project.

I did my NERTO last summer at the NOAA Santa Cruz Laboratory in California. I spent three months there working on a project that utilizes acoustic imagery to estimate the abundance of green sturgeon in the Sacramento River. I chose the Santa Cruz Laboratory because the protocols that I use in my thesis were developed there. Dr. Secor and I thought it would be great for me to see where the inspiration for this type of research originated.

How will this research make a difference?

Atlantic sturgeon are currently listed as an endangered species. This research can help us understand their habitat utilization which is extremely important in terms of sturgeon conservation. The knowledge gained from this research could help us maintain populations and ensure that they are not extirpated from the Chesapeake Bay again.

You are set to graduate from UMCES in August, what are your goals from here?

If I can dream big, I would love to work for the government as a fisheries biologist. I could use the resources from my masters to continue to conduct research on migratory fish and build upon our understanding of species population fluctuations and habitat movements.

What advice would you have for future students who are interested in marine science and the LMRCSC program?

Take advantage of all the opportunities presented to you even if it’s something you’re not sure interests you. If you don’t end up loving it, the experience will help you tailor your interests. A huge part of figuring out what you want to do is learning what you do and do not like. By taking advantage of all the experiences possible you will get a better idea of your goals for the future. 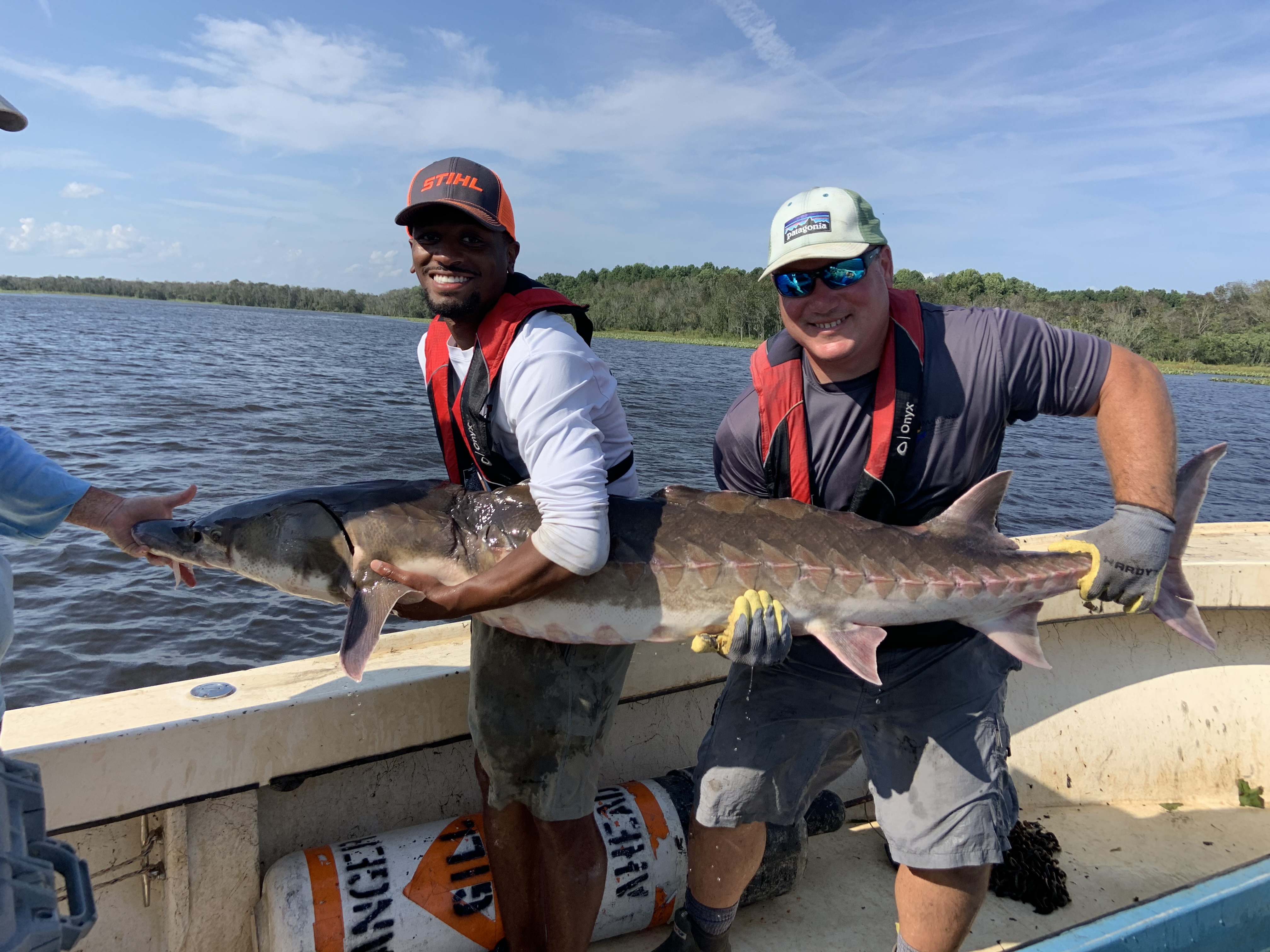