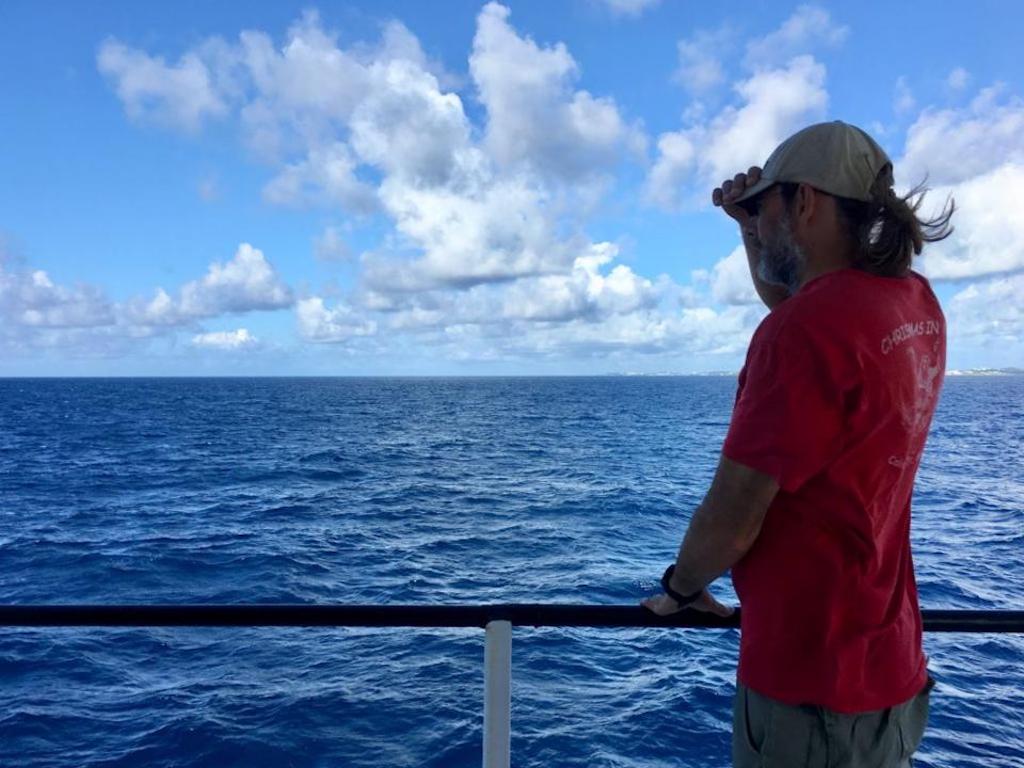 Chemical oceanographer Michael Gonsior assembled a team of scientists to explore the deep Atlantic Ocean to gain a better understanding of the marine carbon cycle and its role in global warming.

I was just 55 miles from the nearest land, but it felt as though it could have been hundreds of miles away. The opportunity to join 15 scientists aboard the research vessel Atlantic Explorer for six days off the coast of Bermuda gave me a great perspective on how breathtakingly important the world’s oceans are to our planet. It taught me about how there are still so many intricacies within this enormous ecosystem covering 70% of our planet that we still don’t fully understand.

Looking out across the horizon, I saw a color gradient of different shades of blue, from the ethereal blue sky to the deep sapphire ocean water, that seemed other worldly. With no land in sight, as snow-white seabirds trailed the boat and lines of earth-toned sargassum floated by, I was reminded just how significant the ocean is. Not only in size, but importance and impact on our world. 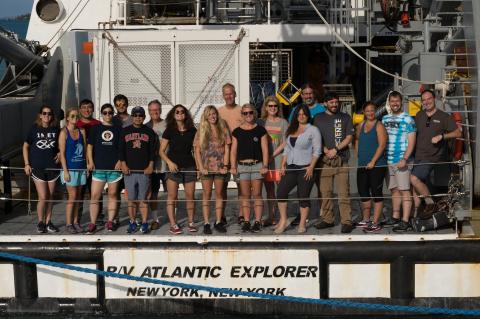 Scientists were gathered aboard the cruise to sample the depths for microscopic organic material and analyze bacterial diversity and function in the deep ocean in an effort to further understand the marine carbon cycle and, ultimately, its impact on global climate. Water samples would be taken every 650 feet—nearly two football fields—until the ocean floor, nearly three miles below, was reached.

We spent the duration of the cruise at the Bermuda Atlantic Time Series (BATS) on the Atlantic Explorer, a research vessel owned by the Bermuda Institute of Ocean Sciences and well suited for scientific expeditions. The BATS station coordinates lie about 55 miles from the nearest island, a landmass only two-fifths the size of Washington, D.C.

A research cruise to investigate dissolved organic matter (DOM) in the ocean may not seem of much importance to the average person, but the way in which these compounds interact with deep-sea life and the entire carbon cycle speaks volumes in the discussion on understanding how our planet works and how we can help it. The collective goal of every scientist on board was to understand how cyanobacteria contribute to the marine carbon cycle.

Nearly half of the carbon dioxide generated by human activities, such as fossil fuel burning, is absorbed by the ocean. Carbon moves in and out of the ocean daily, but it can also be stored there for thousands of years. By researching the bacteria, viruses, and particulate matter within the deep ocean, scientists can better understand the role of microscopic bacteria in moving carbon through the deep ocean and releasing it in the form of dissolved organic matter.

Environmental chemist Michael Gonsior created a seamless team of researchers to join him aboard the cruise, with each of their research interests being complimentary to each other. Research cruises are no small feat to embark on both in terms of planning and cost, with one day aboard the ship costing as much as $40,000 and requiring more than a year and a half of planning. By inviting other scientists to work collaboratively, Gonsior widened the scope and impact the research will have.

Logistics of science at sea 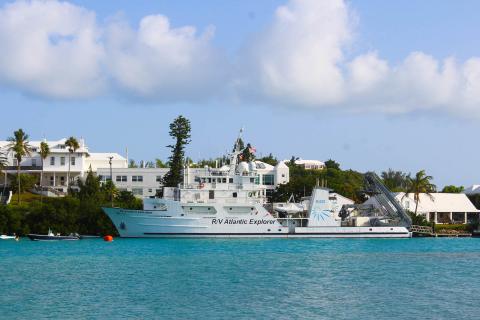 A lot of coordination and cooperation was necessary for all of these simultaneous scientific methods to happen effectively and efficiently. Prior to their arrival in Bermuda, scientists from different research institutions were invited aboard the cruise, and once they accepted a spot on the ship, planning travel and logistics could begin.

The initial start of the cruise was delayed due to engine problems, which put even more time pressure on those aboard the cruise and more motivation for efficient scientific procedures.

Once everyone was aboard and the ship was ready, schedules were made, although were changed along the way to account for long sample processing times—some which took up to 12 hours! Scientists worked long hours, many being able to see the orange and pink hues from both sunrises and sunsets. They ran on just a couple hours of sleep to ensure that they got all the data they needed in the span of the short six days of the cruise.

The challenges aboard the ship were not limited to long hours but also the simple fact that sophisticated scientific processes had to be done on a moving ship, often rocking in all directions from 8-foot swells.

Before even departing from the Bermuda Institute of Ocean Sciences, all the labs had their equipment strapped down with ropes and tape, in addition to all lab benches having raised edges to avoid falls. All the equipment needed to be shipped in on pallets prior to arrival or brought with the scientists on their flight in large plastic totes.

In the case of many of these experiments, researchers had to plan how much of different chemicals they needed and have them sent by boat down to Bermuda since many are not able to be put on a plane.

Behind any successful research cruise is the crew and technicians that allow the cruise to run safely and smoothly. From mobilization—the process of setting up labs on board the cruise—to demobilization, the process of packaging equipment and samples to be taken off the boat, the crew was at the ready to help in any way they could.

Throughout the cruise, breakfast, lunch and dinner is cooked fresh by chefs every day at sea and the kitchen was always stocked with snacks and sweet treats for scientists to munch on during late nights. Engineers maintain the boat’s engines and ensure smooth sailing at sea and technicians help maintain and run the scientific equipment that is essential to scientists aboard. And of course, the captain and his first mate command the ship to ensure everything goes as close as they can get to the cruise schedule.

The idea of going on a cruise in Bermuda may seem like a not-so-serious endeavor but in reality, it was a complex, busy and exhausting time that above all was extremely rewarding. To see scientists in their element, at all hours of the day rushing to collect samples and work collaboratively was telling to how devoted they are to the science and what these discoveries could mean. 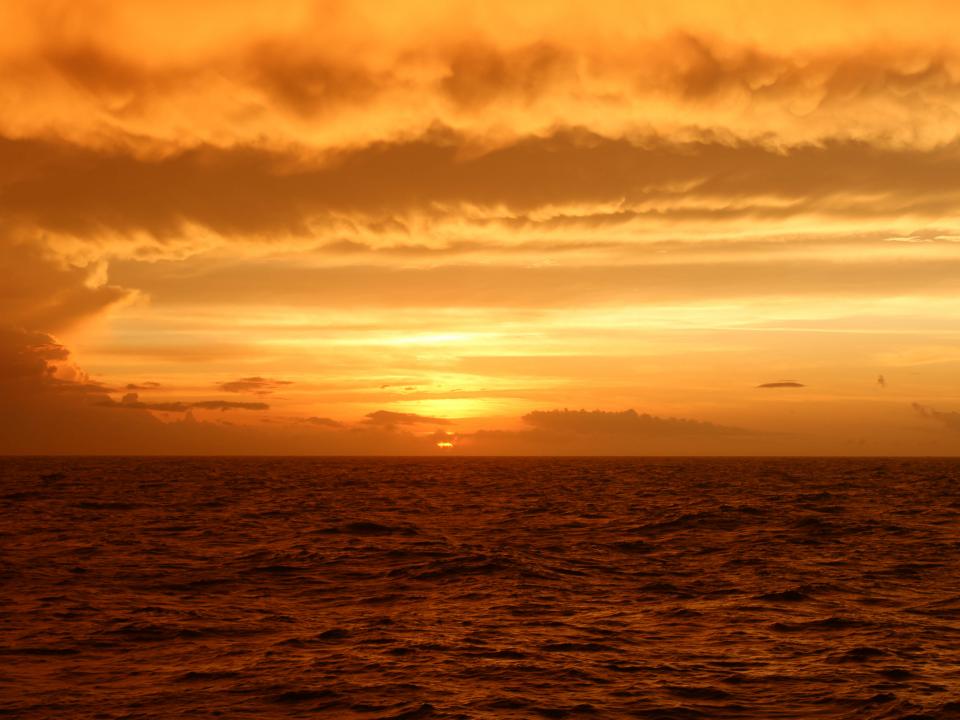 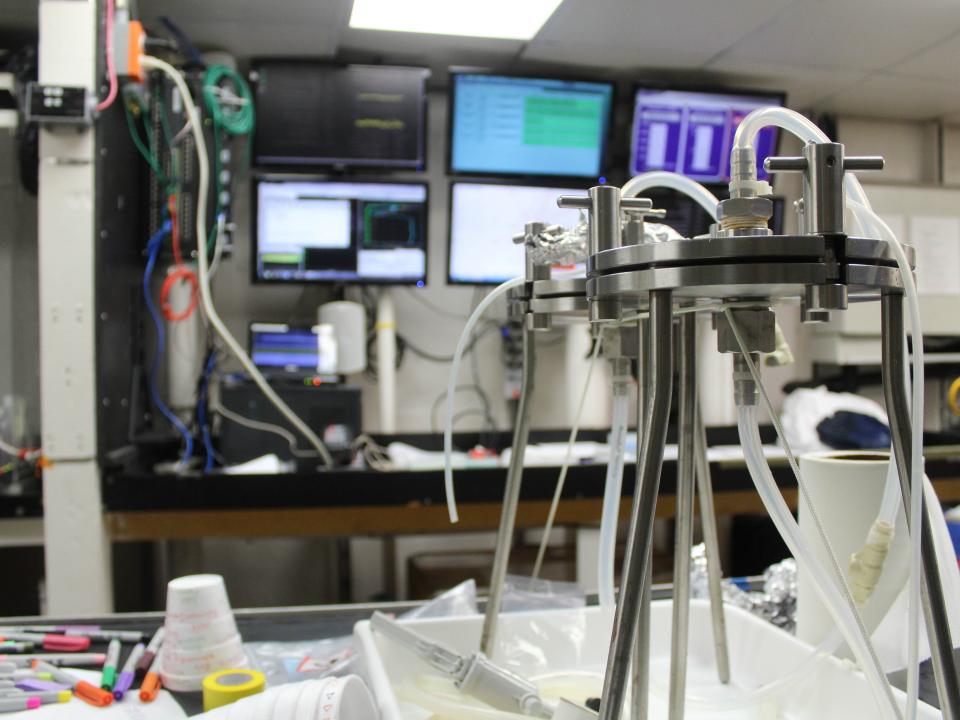 What were scientists doing aboard the R.V. Atlantic Explorer?

The 180-foot boat had three separate labs, each containing lab benches, equipment, and chemical hoods. Scientists from University of Maryland Center for Environmental Science, University of Delaware, Virginia Commonwealth University, and Helmholtz German Research Center for Environmental Health worked in close quarters, filled all three labs aboard, and shared equipment to achieve each of their scientific goals. Before the ship even left port, the table tops were covered from corner to corner in water bottles, filtration systems, motorized pumps, and glass wear.

All scientists aboard relied on one massive piece of equipment called the CTD, named after the basic ocean parameters it can measure, conductivity, temperature and depth. The CTD is fitted with 24 water sampling bottles that can be controlled to trap water remotely from the ship, a feature essential to the scientists aboard who were collecting water samples at different depths and ocean zones.

Each time the CTD was sent to the bottom of the ocean, it could take anywhere from 3 to 6 hours to return, since it had to travel 4,500 meters—about half the height of Mount Everest.

By the end of the cruise, scientists had collected over five tons of water. Principal Investigator Gonsior’s team collected almost 100 ten-liter water samples to see how the dissolved organic matter changed at different deep ocean depths. They were specifically looking at one component of organic matter in the ocean called chromophoric dissolved organic matter, or CDOM, which stores some of the ocean’s carbon. The source of this organic matter is still unknown, but it is thought that it may come from picocyanobacteria, tiny bacteria that live freely in the water. 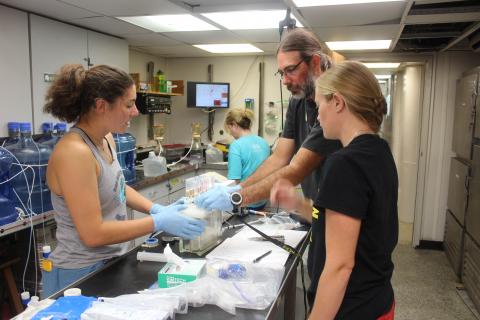 Along with his graduate student Maddy Lahm and post-doctoral student Leanne Powers, Gonsior will be looking to identify the molecular formula of the thousands of compounds that they have extracted from the deep-sea water to further understand what elements make up this matter once the return to their lab in southern Maryland.

In addition to understanding what makes us organic matter, organic chemist Norbert Hertkorn from the Helmholtz German Research Center for Environmental Health took water samples back to Germany to identify how the elements of these molecular structures are arranged. This can help scientist put together the puzzle pieces on how all the components in this system interact, from the molecular level to the bacterial and viral communities.

The bacterial and viral communities in the ocean play a huge role in the movement of organic matter throughout the deep ocean. They degrade and consume particulate matter, made up of remnants of photosynthetic marine organisms that float down form the ocean’s surface, and release the organic matter stored within the bacteria into the ocean system. This is where the expertise of scientists at the Institute of Marine and Environmental Technology and the University of Delaware were integral on the cruise. 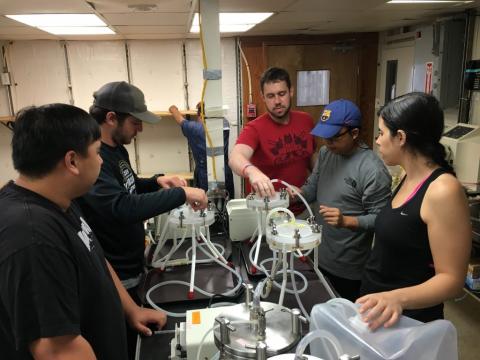 Marine microbial ecologist Feng Chen and his lab were aboard the cruise to help collect samples of the bacterial communities at different depths along the 4,500 meters distance to the bottom of the ocean to then take back to the lab in Baltimore to identify not only the types of bacteria that they found in the deep sea but the genes that were being expressed when they were collected. By collecting this data, they can understand how conditions such as temperature and depth affect the microbial community and thus how the microbial community affects nutrient cycling in this ecosystem.

The bacteria in the ocean release the CDOM in part when they are broken open by viruses. Viruses are predicted to be the most numerous being on the Earth, so understanding their impact on bacteria in the ocean can open the door to new discoveries. They contribute to the ocean’s nutrient cycle by attaching to bacteria and breaking them open, releasing the organic matter stored inside.

The microbial ecologists from University of Delaware worked in a lab that focused on virology—the study of viruses, so this numerous specimen was the focus of their work on the boat. Aboard the ship they worked closely with the group from IMET, as their process of filtering water for bacteria and viruses relied heavily on each other.

To find microscopic beings like viruses and bacterial, the water samples were run through a series of filters that will catch any object above a certain size. The substrate caught by the filters is washed off and then analyzed for DNA and identification purposes. 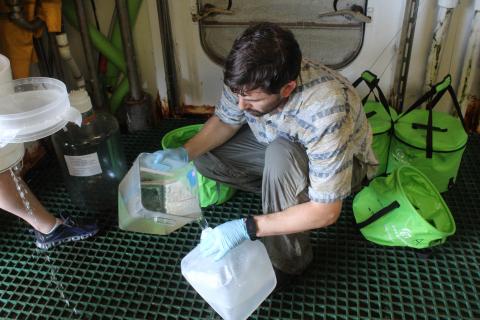 The last of the scientists onboard came from UMCES’ Horn Point Laboratory. Microbial ecologist Jacob Cram and his research assistant Ashley Hollins were filtering water not for viruses but rather particle associated bacteria—organisms that stick to particles of organic material in the ocean made up of remnants of marine organisms that play an essential role in transporting carbon into the deep ocean. They collected samples to bring back to the lab on Maryland’s Eastern shore to identify how many of each bacterium were found in their water samples and the size of the particles they collected in deep ocean waters.

The experience of joining researchers on a scientific cruise, floating in the open ocean for six days while collecting water from thousands of feet below was incredible and inspiring that is not soon to be forgotten.

While there were bumps in the road between cruise delays and sea-sickness, at the end of the day every scientist arrived to their home institution with their water samples ready to analyze them over the coming years in hopes of better understanding the marine carbon cycle. 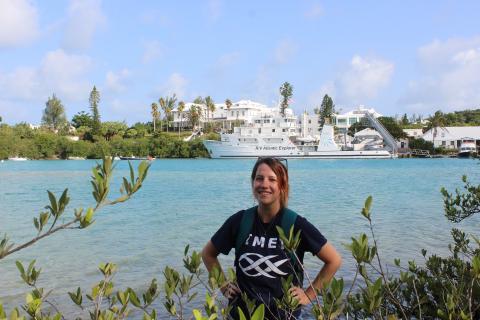