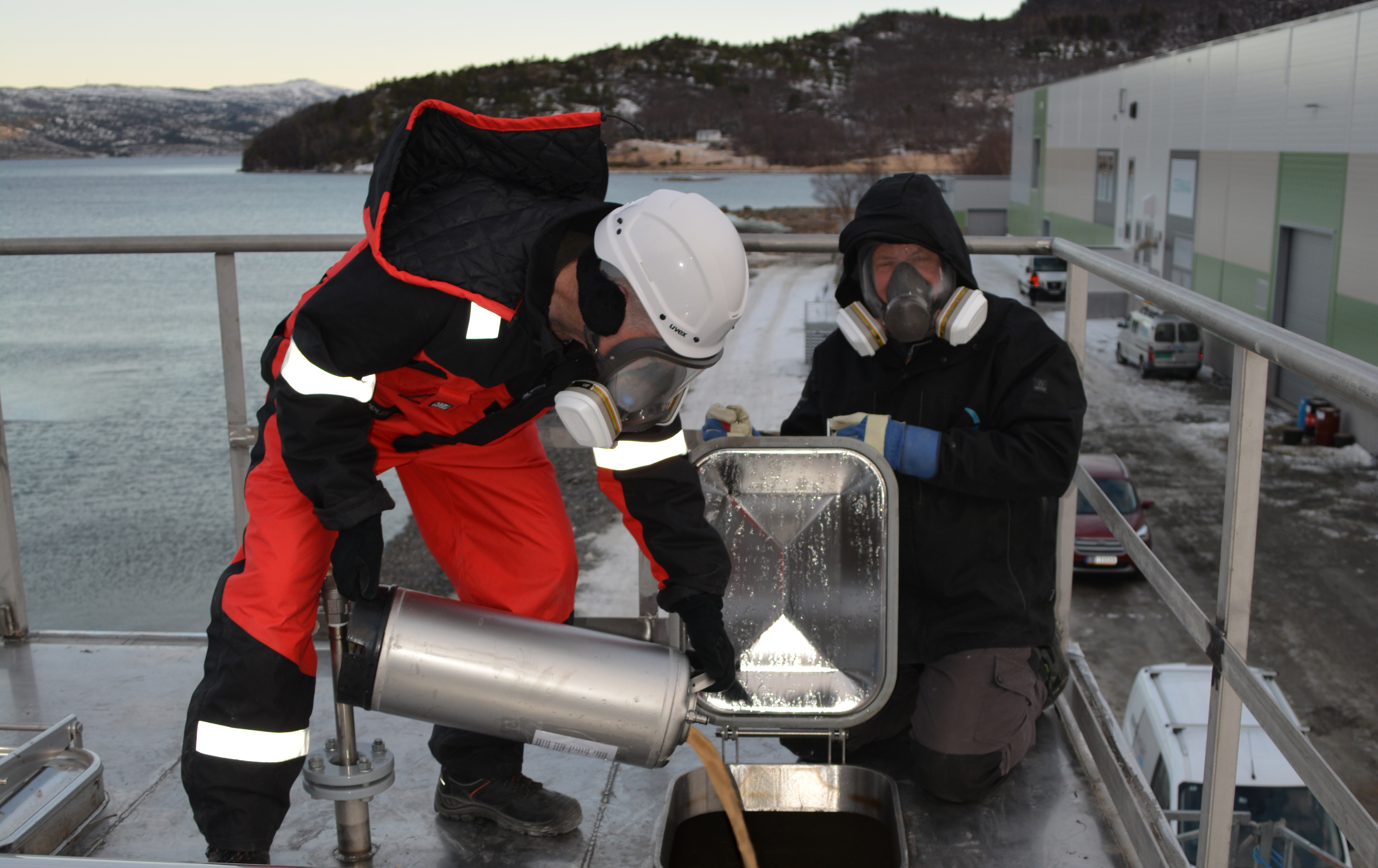 Some of the world’s largest producers of Atlantic salmon are counting on scientists at the Institute of Marine and Environmental Technology to help resolve common issues in aquaculture.

Even as it moves toward land-based aquaculture, Norway faces another problem—solid waste management. While the country used to dump waste from the systems into the marine environment, new regulations call for a more environmentally responsible method.

IMET scientists Yonathan Zohar, Ten-Tsao Wong, Keiko Saito and Kevin Sowers have been working with companies in Norway to resolve these problems. Saito and Sowers developed a culture of organisms that can break down solid waste and eventually convert it into combustible biogas. They brought this technology to Norway to help aquaculture facilities manage their solid waste. In addition, Zohar and Wong, are developing a formula to produce reproductively sterile fish to address the escapee problem that threatens wild stock. Both projects have potential to be adapted for use across the aquaculture industry.

“With IMET, our mission is research education and economic development,” said Zohar, chair of University of Maryland, Baltimore County’s Department of Marine Biotechnology and head of IMET’s Aquaculture Research Center. “IMET scientists are solving aquaculture sustainability issues in the most intense, visible, productive aquaculture country in the world.”

The Aquaculture Research Center is located in the heart of IMET’s headquarters at Baltimore’s Inner Harbor. In this fully contained, land-based facility, experts aim to improve environmental sustainability, human health, and economic viability by working with a variety of marine species to understand reproduction and trait enhancement, disease control, sustainable feeding, and aquaculture microbiology.

While interest in aquaculture is growing in the United States, the industry is still relatively small compared with other countries. That makes IMET unique, Wong said, and puts its scientists ahead of the curve in developing technologies that can be implemented globally.

Sowers agreed, adding IMET is in a good place as more of the world moves toward aquaculture.

“Particularly as the need for fish increases, there’s going to a greater burden on the environment,” he said. “We’re sort of getting ahead of things here. If we can create a sustainable industry, using Norway as an example, eventually that’s going to filter out into other countries.”

Sowers and Saito recently visited Forsan, Norway for the first official test of his project that will help one of the largest Norwegian Atlantic salmon companies, Cermaq, convert its solid waste into fuel-grade methane. Cermaq and Sterner, an engineering company Cermaq works with, approached IMET with the project two years ago. Sowers and Saitobegan developing a methane producing culture last April.

Sowers and Saito started off working at IMET with waste shipped from Norway to develop the most efficient culture to achieve his goal.

After running tests locally, Sowers and Saito grew up the culture to 250 liters in the IMET scale-up facility and sent the concentrated organisms in a 20-liter stainless steel canister to Norway. They followed them about a week later to inoculate Norway’s waste-filled bioreactor with those micro-organisms.

The first tests went well. Sowers and Saito will be repeating the process with additional inoculations to build up the process to manage 100 percent of the waste at a facility produces about 15 million smolt, or juvenile salmon.

In the end, Sowers and Saito can help Cermaq adhere to the Norwegian government’s new regulations for waste management at land-based operations.

“The plant itself will be able to treat its own waste, convert it to gas and actually use that biogas, which is mostly methane, and just burn it for energy,” Sowers said.

Sowers and Saito tailored their work for salmon in this case, but said the consortium can be reworked to convert any kind of waste.

“The idea is we look for a way for land-based aquaculture systems to be environmentally sustainable, so zero waste or close to zero waste coming out,” he said. “The biogas that we generate can offset some of the energy costs of the operation.”

While Sowers and Saito were developing his waste-converting microbes, Wong and Zohar have been working to sterilize fish raised in ARC.

A Norwegian company called Europharma and one of their subsidiaries, ACD Pharma, tasked the IMET scientists with finding a solution to a major threat to the Norwegian aquaculture industry. The Atlantic salmon they raise run the risk of escaping from the net farms and breeding with the wild stock, and therefore displacing them and changing the natural ecosystem.

Producing reproductively sterile, farm-raised salmon would not only resolve this issue, but would also help the fish divert energy they used to develop reproductive organs to instead help them grow flesh and muscle faster, Wong said.

“Sterile fish may be able to be more cost effective to grow. They will grow faster and reach the market quicker, and save the amount of labor to grow them,” he said.

The technology to produce reproductively sterile fish isn’t new, Wong said, but other institutions used genetic engineering to achieve this goal which haven’t been successful because genetically modified organisms, commonly referred to as GMOs, aren’t widely accepted by consumers.

The IMET scientists are taking a new approach Wong called transient gene silencing. He described it as a short period of gene breaking. It’s a multi-step process that starts with the scientists stripping eggs from females and artificially inseminating them with sperm stripped from the males. Once the eggs are stripped (unfertilized eggs) or fertilized, they are immersed in a compound that penetrates the eggs and silences a gene critical to very early development of the sex cells, Wong said.

Their problem is timing. Testing if their compound and the amount of time the eggs are exposed to it is making the fish sterile can take at least one year for salmon. To resolve this issue, they started testing with zebrafish, which reproductively mature in three months. Then they moved on to rainbow trout—a surrogate species to salmon that, unlike salmon, is available year-round.

“I just need to find the right way, right condition, right immersion time to get them to 100 percent and the difficulty is every test takes a longer time to confirm the result is clear, that the sterility is successful,” Wong said.

Their effort is already proving valuable, however. Other groups have taken an interest in the scientists’ work, funding them to work on other fish, such as tilapia and sablefish.

“With initial funding from Norway, it has a much larger implication and significance eventually,” Zohar said.