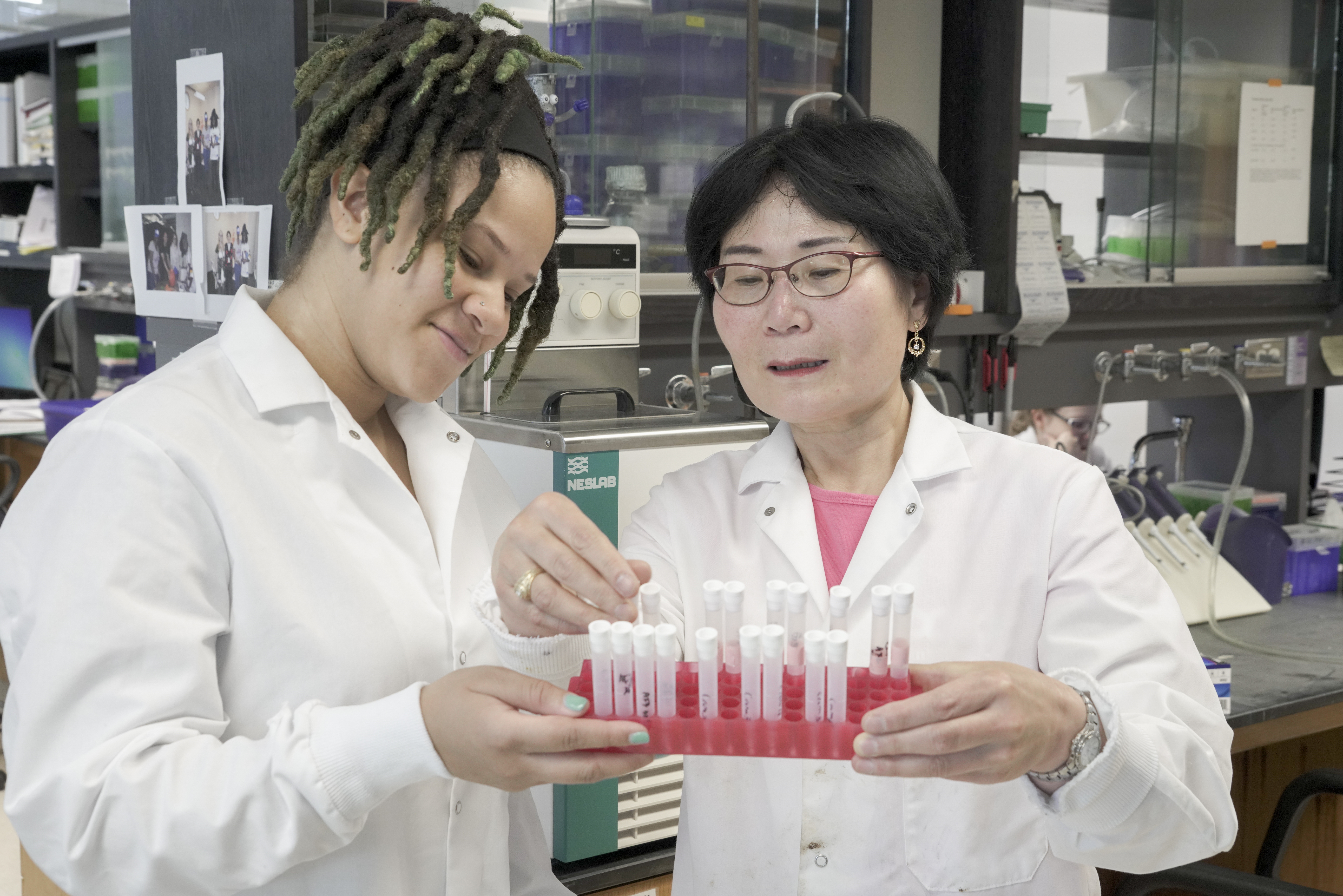 Anya Byrd’s interest in marine science began where many young scientists first encounter the aquatic world - at the National Aquarium in Baltimore. At age 5, she was fascinated by all of the animals in the tanks. Years later, she’s pursuing that love right next door - at IMET. Byrd is working toward a Ph.D. in the lab of Dr. Sook Chung. Byrd arrives at IMET having earned several prestigious awards, all of which will help her in her research and career ambitions.

As an undergraduate, Byrd was a Meyerhoff Scholar at the University of Maryland, Baltimore County. This program is focused on increasing diversity in STEM fields and has a focus on conducting independent research. Through this program, Byrd had her first exposure to working in a lab, through summer internships. She also had her first exposure to IMET as an intern in Dr. Jim Du’s lab. She enjoyed her work and decided to continue to a Ph.D. after graduating from UMBC. Having already had a research experience in the Du Lab, she was excited to return to IMET. When Byrd applied to study at IMET, she applied to and was awarded the Presidential Fellowship from the University of Maryland Center for Environmental Science. This provides two years of funding and will greatly help her as she pursues her research in Dr. Chung’s lab.

To support her graduate research, Byrd also applied for and was awarded a National Science Foundation grant through the Graduate Research Fellowship Program (GRFP). This fellowship provides a stipend and tuition for three years. It also gives students connections to international internships, which is particularly interesting to Byrd. “I would like to see how different people are doing marine science, in very different environments,” she said. If Byrd could go anywhere for an internship, it would be to Japan. She is interested not only because Japan is a leader in marine science, but also because she has a strong interest in the country’s culture and language. By providing resources and connections, the GRFP may help Byrd travel while gaining new scientific skills and knowledge.

Byrd is also a National Oceanic and Atmospheric Administration (NOAA) fellow in the Living Marine Resources Cooperative Science Center (LMRCSC), which is directed by Dr. Rose Jagus at IMET. She’s particularly excited about this, not only because it provides funding and professional development, but because it gives her the opportunity to interact with several programs within NOAA. Byrd is interested in a career in marine policy, and so this exposure is helpful in determining whether that will be a good fit and in advancing her toward that goal. “All of these connections give me a foot in the door,” she said.

Already, Byrd has benefitted from the LMRCSC program. She attended a professional development workshop on the Eastern Shore, where she had trainings on time management and also had a chance to talk with people who harvest crabs and oysters. She appreciated the opportunity to see where the research meets the real world and to talk with people whose livelihood depends on effective management and conservation of marine resources. As part of her fellowship, she will also complete a NOAA Experiential Research and Training Opportunity. By working directly in a NOAA lab, she will have the opportunity to experience the everyday work of a NOAA scientist. She would like to complete this in a NOAA office on the West Coast, furthering her understanding of different marine ecosystems.

With all of these opportunities ahead of her, Byrd has a lot of things to be excited about. First, she’ll spend time at IMET taking courses and developing her own research. Byrd is happy to be able to hone her lab skills as she works on the Blue Crab Genome Initiative (BCGI). Specifically, she is trying to confirm the sequence of the Mammalian Target of Rapamycin in the blue crab genome and test whether or how this gene influences blue crab growth and size. She aims to help scientists better understand how blue crabs grow and respond to stress.

While Byrd is interested in travelling the world with the GRFP and working for NOAA on the West Coast, she is also excited for the time she gets to spend at IMET, right next to the Aquarium where she fell in love with marine life. She said, “I’m looking forward to making connections with people at IMET. This place is great for bringing together people who study completely different things … Because of the diversity of thinking, it feels like it’s more likely that you’ll find answers the problems that you’re having, and I think that’s awesome.”